Does a Wilderness Ranger poop in the woods?

An interesting difference working in Washington was working in a Wilderness that had "toilets" in the backcountry. At first I was put off, as there aren't supposed to be structures in Wilderness area but as the weeks passed by it be came clear to me that for reasons yet to be discovered (higher visitation= more instances of pooping? More intense root system= harder digging= less people burying? Less informed visitors?), the visitors to the area I am working seem to have a harder time pooping in the woods correctly. Summer of 2014 in the Hoover Wilderness in California's Sierra Nevada I rarely found "surface poops" or toilet paper on my patrols. In Alpine Lakes Wilderness I find massive piles of toilet paper every patrol. We need to bury our poop in the woods to keep others from coming into contact with it for health and ascetic reasons. Some people may not consider the fact that even if you surface poop very far from a water source, rain and snow melt may carry your poop to the nearest lake. People drink from that lake or it's runoff and can get the parasite Giardia or other diseases. The reason we tell people specifically to bury it 6" down is because that is far enough down to keep it from easily being unearthed and also puts it into the most active layer of soil to get it to decompose as fast as possible (too deep is a thing, so don't get down to mineral soil). You may hear people talk about the "smear method" which is basically thinly smearing your poop on sun exposed rocks. While this method does work because the UV rays basically sterilize your poop, people are just recreating too much for this be a good option. No one wants to see poop smeared all over the place and it leaves the poop exposed where other folks can come in to contact with it. The only time smearing seems applicable in this day and age is if you're very remote in an area with very low frequency of visitation and there's no soil...rocky, desert or tundra. Once outside the body Giardia cysts can live for a couple months in cold water or soils, it has a shorter lifetime under warmer environments. Here's a good diagram for ways the pathogen spreads, it's fecal-oral.

Your uncle talk about the "good old days" when everyone used to drink directly from the mountain streams and no one buried their poop? The first documented case of Giardia in the US wasn't until 1970. Apparently there was a spike in western visitation to the USSR and Leningrad's (now St. Petersberg) municipal water supply was full of Giardia. So that's one theory of how it came and why it's only being talked about in our country in the past 30-40 years. Also, there are WAY more people recreating outside and more people means more people pooping mean more potential for disease spread.

You have a friend who never filters their water do you? You can also be an asymptomatic carrier of Giardia. 20 percent of the world’s population is infected, and up to 7 percent of Americans (most without any symptoms). So if some ranger tells you about a stream he's been drinking out of for decades and never gets sick, it may mean nothing to you! That all being said, Giardia is not terribly common in concentrations that would make you sick in remote waters, you're more likely to contract it from poor hygiene which is common on the trail so: bury your poop! In an arid/soil deprived environment where your poop won't decompose? Pack out your poop! Bring some dog poop bags or other plastic bag when you go on your next desert hike or summit a peak where there's no soil, they're so light. See it's just like having a dog, no big deal! 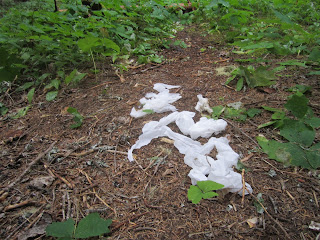 Typical TP dump, I find these all the time! You should be packing out your used toilet paper. If nothing else out of respect for the 100's of people that will be visiting the area you're in before it has a chance to decompose and have to look at your garbage. 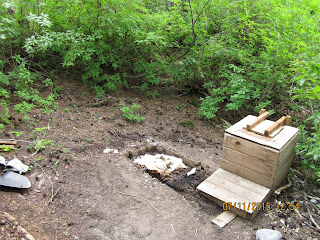 toilet moved off it's full hole 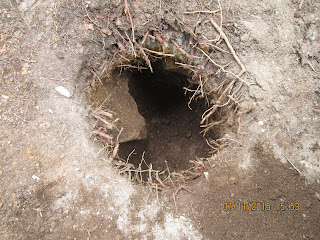 what's worse than exhausting yourself digging a pit toilet hole? A giant rock that you can't get out of the way taking up valuable poop real estate 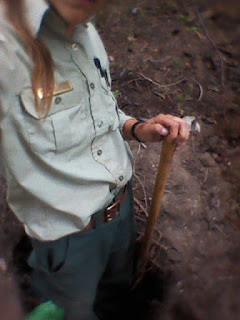 Standing in the hole for scale. Not as deep as I wanted but okay for my first attempt at this. This one is over 10 miles from the trailhead and still filled up in one season's time...