"If you love your work, you don’t need to rest. My work is nourishing, and in many cases it’s what has got me from one day to another. The people I’ve met through it keep me going."
-Emmylou Harris

Last August the Great American Eclipse came and the path of totality went right over the Mount Jefferson Wilderness. In an effort to manage the anticipated crowds that would come flocking to the Wilderness Area a request was put out for extra Wilderness Rangers to come down and help patrol. To add to this already complicated event, a fire broke out in the Mount Jefferson Wilderness about a month before the eclipse which was still burning during the eclipse. This fire ended up closing about two thirds of the Wilderness to the public so the fire personnel could operate and to keep the public safely away from the fire. Since the land managers were anticipating a lot of visitors and a lot who were less familiar with proper Wilderness human waste etiquette, they put out toilet stations. These were basically 5 gallon buckets with gelling agent in them and a little privacy tent. All these waste buckets would get packed out after the eclipse. Our main jobs besides simply being a presence were to monitor areas where camping wasn't allowed (we found some folks that were setting up in a well-marked day use only area), monitor the boundaries where the Wilderness was closed for the wildfire (which were signed and flagged off but we still caught people entering the closure area), and checking in that visitors got their Wilderness permits and knew about the campfire restrictions. Although there were enormous numbers of people anticipated for this, in the end it was not overwhelmingly crowded, more or less normal weekend numbers relative to what we're used to seeing in Alpine Lakes Wilderness. Probably because of how smokey the area was a lot less people came out.

It's always exciting to get to see another Wilderness Area but to do so while witnessing the solar eclipse from the path of totality was truly a privilege and honestly one of the most spectacular things I've seen. 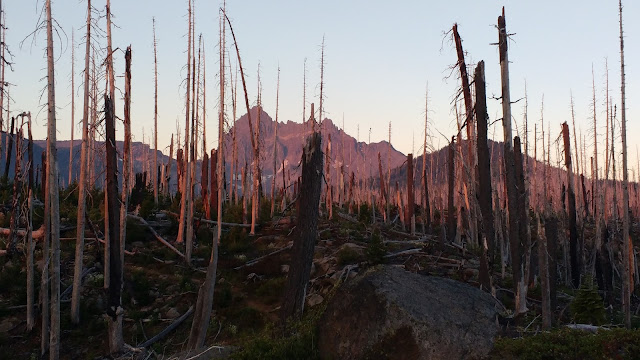 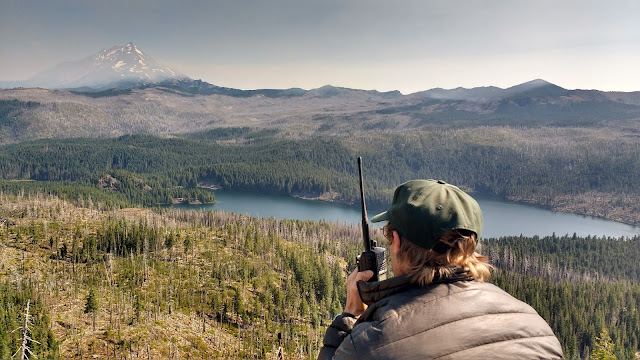 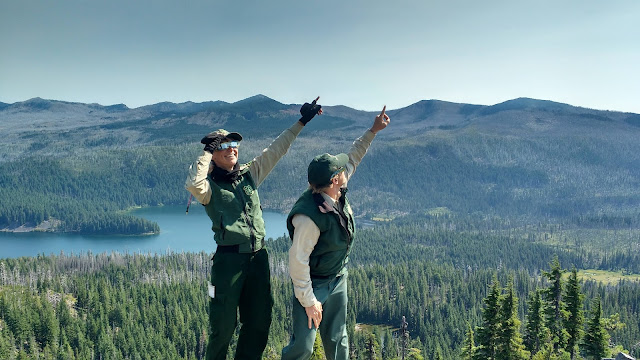 pointing at the sun, eclipse glasses on...during the eclipse it got so dark we could see the glows from nearby burning wildfires 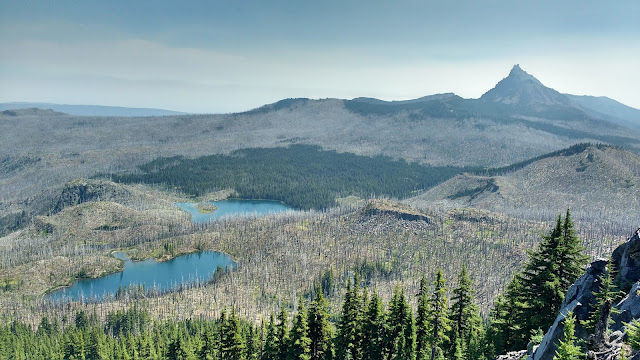 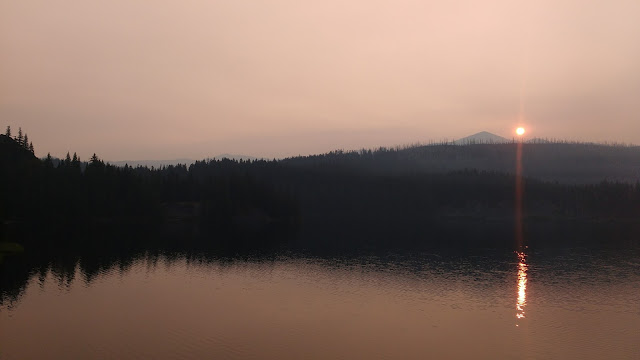 we were lucky to have a clear day on the eclipse because this is what it looked like on the other days, very smokey. 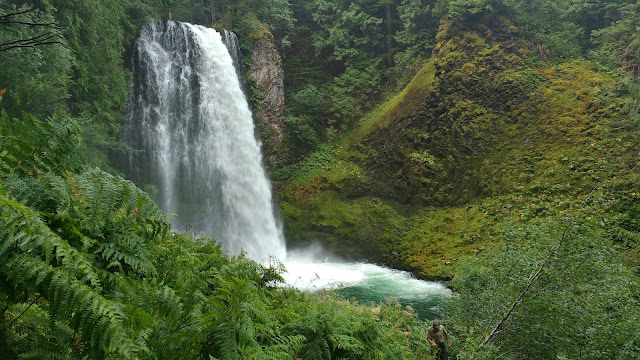 despite how charred this Wilderness is from old wildfires, there are still lush places hidden away

“In the world of mules there are no rules.” - Ogden Nash

Last spring we got to go to horsemanship training in the Methow Valley. We learned how to catch, brush and saddle horses and mules as well as how too wrap and tie up loads. We got to learn basic riding techniques and also how to load them into a vehicle. 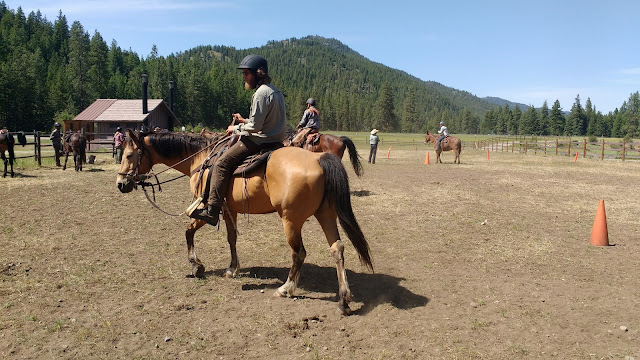 Once you catch a horse (catch makes it sound like you chase them, actually you are calmly following them with the bridle until you can put the bridle on) you take them and brush them down. This is important so any burs or clumps of dirt that could be abrasive under their saddle/paniers get brushed off. It also lets you see your animal closely so you can see if they have any wounds or other issues that need to be cared for or monitored. Then you put on a saddle blanket which is another way we prevent abrasion to the animal and then you put on their saddle. There are riding saddles which are designed for animals that someone will sit on and packing saddles for animals that will be carrying/ have loads attached to them.

When packing trail crews in, there are a lot of awkward things that need to be sent in...mostly strange shaped tools. It's generally easier to load up paniers onto an animal but some things just don't fit into pre-made panier bags and boxes and need to be wrapped up into what we call mantie loads. Manties are basically heavy duty canvas sheets wrapped around whatever you need to load onto your stock. They get wrapped up in a particular way with rope and basically a lot of variations on the half hitch knot. 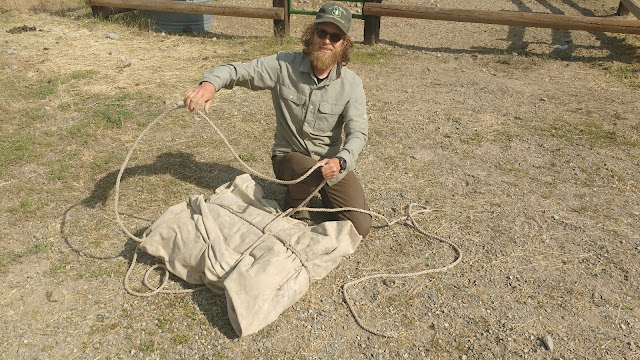 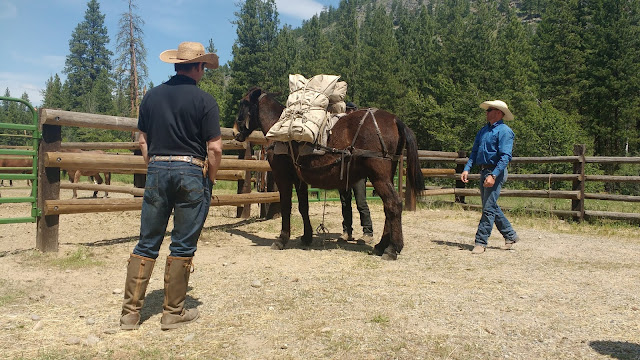 a properly tied mantie load on 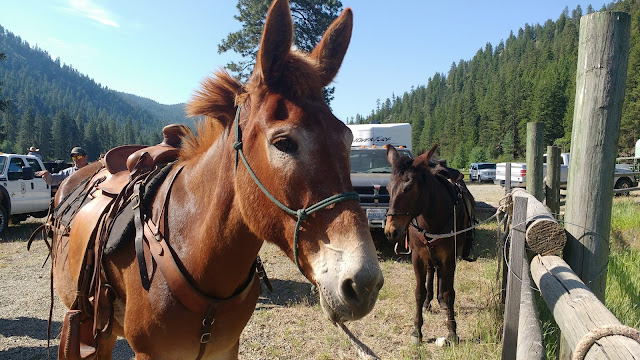 my mule Suzy with her riding saddle on 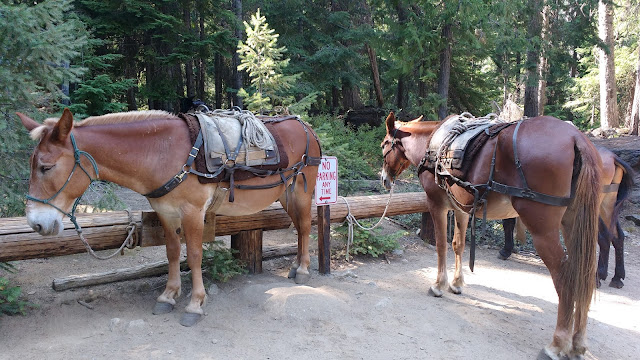 pack saddles on and ready to load up at the trailhead 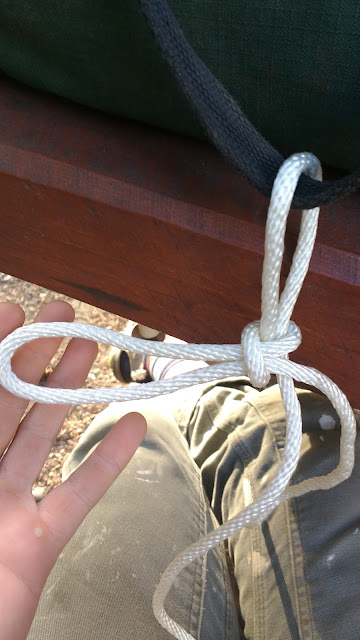 The big takeaways from working with the pack string last season are that mules don't listen well, and it's important to have well-trained animal and packer leading...the rest of the string will be more likely stay on task if the leader and lead animal are operating smoothly.
Posted by V at 11:27 AM