"Of course motors in a wilderness setting is a shock to visitors. But the reason motors are generally prohibited is not primarily due to their effect on visitors. Howard Zahniser, who wrote the Act, argued that we need 'areas of the earth within which we stand without our mechanisms that make us immediate masters over our environment.' And these motors do make us immediate masters over our environment. If a tree falls in the wilderness — because you cut it down with a chain saw — and there's no visitor to hear it, has wilderness character still been degraded? Of course, the answer is 'Yes.' "
-Kari Gunderson, adjunct assistant professor for the Wilderness Management Distance Education Program and Mission Mountains Wilderness Ranger

I've been spending a lot of time working on log out since coming on in May. As a way to supplement attempting to acquire a full 6 months of work (which is what I'm limited to as a seasonal worker) and as a way to bide time as we wait for the high country (which a huge bulk of our Wilderness is) to melt out. I act as an honorary trail crew member for points during the season. Washington had a decent winter this year and that in conjunction with the dry winter it had the previous year (and likely other factors too) has made for a lot more logs down than last year. The Wilderness boundary on my district starts a little ways back from all the trailheads, additionally we have other areas of trails that are completely outside the designated Wilderness which means in those places we can use chainsaws for logging out the trail! 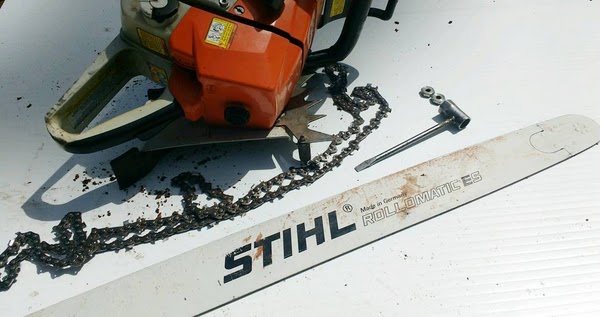 We went over basic saw operations as wells as sharpening and cleaning the saw. Some of this was new to me and some of it review. Here's one of our saws with the bar and chain removed for cleaning. 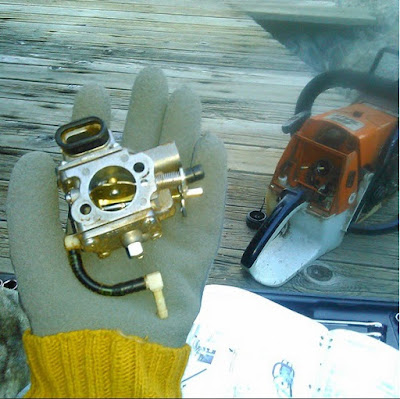 This is the carburetor pulled from the inside of a saw. It manages the fuel and air mixture. When you set the choke to start the saw it moves the circular plate (which in this photo is flipped open, in the middle) to close up that circular hole effectively blocking air and thus sending more fuel to the saw which helps start the saw when it's cold (hasn't been running).

While the rest of trail crew was away at a stock training I spent a week with my boss, just the two of us, working on logging out non-Wilderness trail sections with the chainsaw. Here he is working on some 30"+ monster that used up our gas for the day. 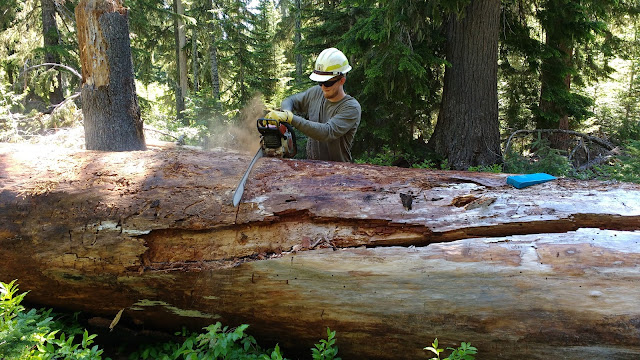 Eric cutting into another monster gas hogging log. The blue thing is a wedge that can be inserted into the kerf to mitigate bind and open the kerf for more space. 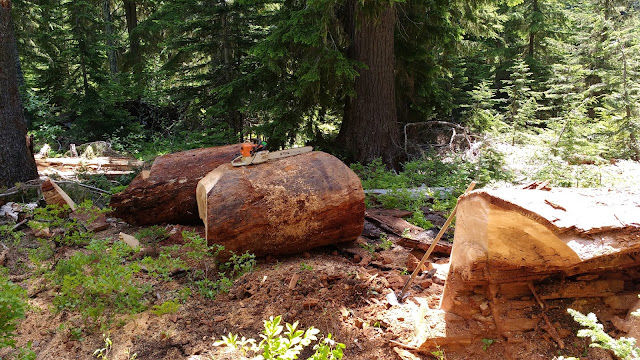 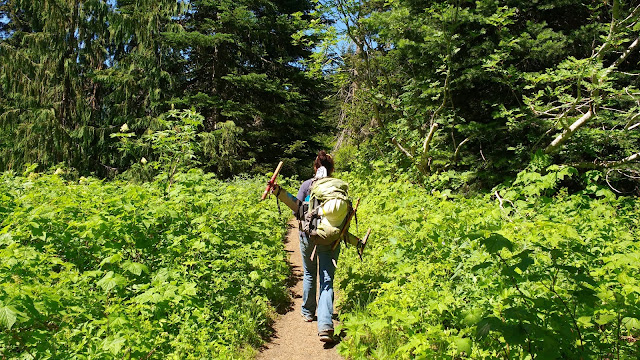 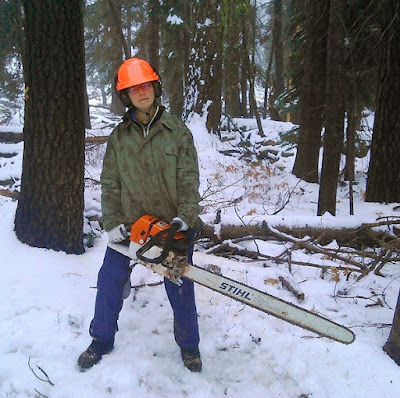 Me a few years ago with the saw I learned on...an old Stihl 066 with a 36" bar. This thing is huge, heavy and hard to manage...needless to say I am happy to be using smaller and lighter saws in my Forest Service work!

On the job I really haven't gotten to use a chainsaw much so it's pretty exciting to get to spend some time chainsawing at work. I learned a lot from Al since he's a sawyer on his fire crew so I've been comfortable running a saw for a few years. I have also learned a lot from my boss John. Running the saw isn't hard or overwhelming. What tricky is the bind assessment. When you saw a log it's going to pinch one way or another depending on how it's laying and what it's pushing against. Without getting into too much detail (I would but I don't have any good diagrams! Everything I found on web searches is too confusing) it's important how you cut a log (from the top down, from the bottom up, from the side etc) and the way you cut is dictated by how the log will bind and potentially pinch the bar of your saw. I got a general sense of bind assessment working with crosscut saws but generally I like wedge open most crosscut cuts for sake of creating a larger kerf if not for mitigating bind so I actually feel like I learned a lot more about binds working with a chainsaw. Not using wedges as much with the chainsaws gave me a better understanding of the binds and watching what the kerf is doing (opening or starting to pinch).

In addition to considering binds in how you cut you also need to think about how you can manage the piece you're cutting. A good example is using a compound cut to direct a heavy chunk of a log to fall away in the direction you want to make it easier to move. 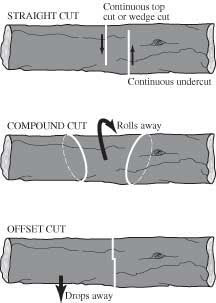 Neat stuff right?? It's easy to come up to a log and just start cutting especially when you get to use a chainsaw but particularly when logs are larger and trickier to move there's a lot of thought that goes into how you cut something. There's a lot more to say about this.... cutting to mitigate barberchairing, limbing to log to avoid funny side binds etc etc but I'm trying to keep this simple so I won't go into that.
Posted by V at 8:19 PM