Silence is one of the hardest arguments to refute.
Read more at: http://www.brainyquote.com/quotes/keywords/silence.html
“Such silence has an actual sound, the sound of disappearance.”
- Suzanne Finnamore

Last week I went out with Ryan from our motorized trail crew to work on a rockier portion of trail. Since we weren't working in the Wilderness we used tools I never use. 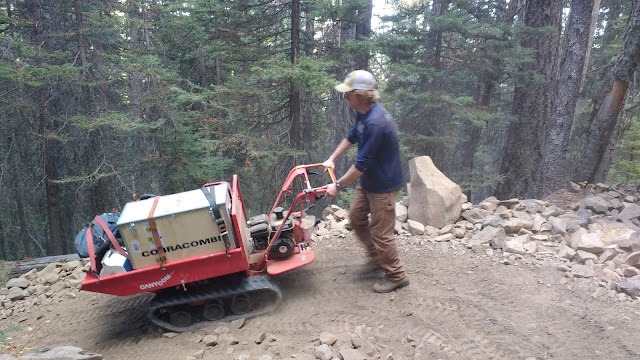 Ryan with the power wheelborrow we used to pack in the jackhammer/rock breaker and everything else we used that day. This thing was tricky to manage! I was excited initially but after about 5 minutes I looked over at Ryan and said "this isn't exactly fun is it?" He laughed and shook his head. He would run ahead on the trail and knock rocks out of the way making maneuvering the thing easier on me. Occasionally he would look back to check on me and give me the thumbs up to reassure me. Sometimes I gave the thing too much gas and it would kind of take off too fast. Or I would go over obstacles and wide eyed hope the thing didn't fall over (which is did once, and it was okay...not too hard to upright with two of us pushing). 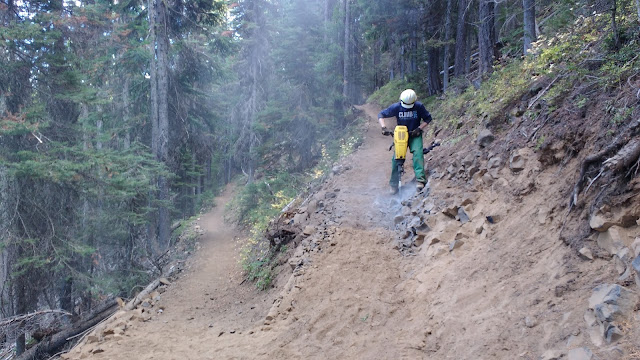 Ryan working the rock breaker. This thing weighed at least 50 pounds, it was exhausting to run. 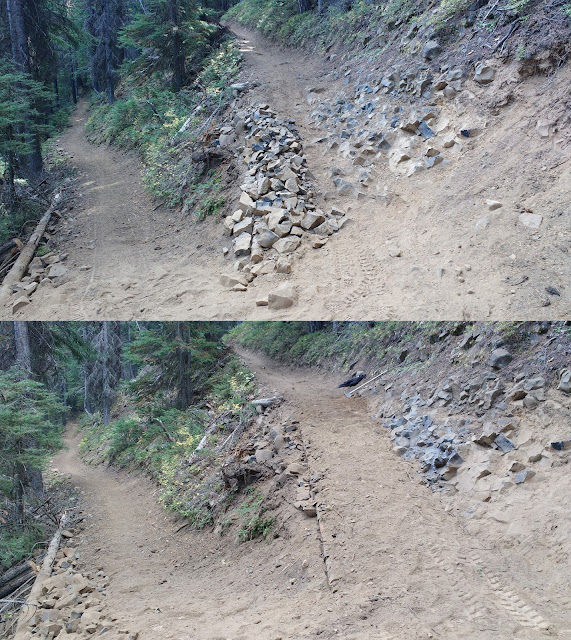 Here's the before and after of the work site. As you can see, the rocky hill pushes too far into the trail corridor. People don't want to walk or ride on that kind of thing so it was pushing people over and tempting some to cut the switchback entirely. Under the pile of loose rocks on the left is a not visible log crib that supports/holds in the trail above. We leveled out the rocks on top (any rocks above the log cribbing/retainer will just get knocked into the trail below), broke up the solid rocks along the hillside then poured dirt over everything.

All day we were running these things that were motorized and loud. The noise alone was exhausting. It was a rewarding project and I'm always excited to learn to use new tools but the whole thing just made me grateful for the Wilderness Act and that we have places where even as workers for a land managing agency, we have to function and get jobs done without loud equipment.
Posted by V at 6:36 PM