"Thousands of tired, nerve-shaken, over-civilized people are beginning to find out that going to the mountains is going home; that wildness is a necessity; and that mountain parks and reservations are useful not only as fountains of timber and irrigating rivers, but as fountains of life."
-John Muir

So I had my first 4 night hitch over the past weekend. It went well, I got to do a lot of different things. Cleaning up campfires (backcountry ranger secret tip: foil does not burn, it turns into tiny annoying microtrash), talking to visitors focusing on our recent fire restrictions (no campfires in our backcountry for the rest of the summer) and on this weeks upcoming trail quota season, scouting for down trees and other trail issues. I hiked out about 20 pounds in metal grates people bring in to cook over (when we are not in fire restrictions) and never seem to pack out.

I also had the honor of opening a historic backcountry cabin for the season. It was built in the 1944 from native materials and for a long time it was stationed regularly by a ranger. It hasn't really been stationed regularly since the early 2000's but we still stay there sometimes and it's also used by other Forest Service folks…botanists, range people etc. There are some marmots that live under the cabin and they have chewed holes in the floor and pretty much taken over. I measured the holes and took inventory of the tools and hardware in the cabin so we can repair it. I got there thursday night and took off the shutters and opened the windows and then slept on the porch to let it air out over night. I sprayed all the surfaces down with bleach and while wearing one of those respirator masks (because who wants hantavirus). I swept out 6+ dustpans of marmot poop. I also got on the roof and opened the skylights which really makes the cabin feel a lot nicer.

When you buck a log, you want to put a wedge in to pry your kerf open. Saturday I went back to a downed tree with a saw I found at the cabin to take it out of the trail's way. 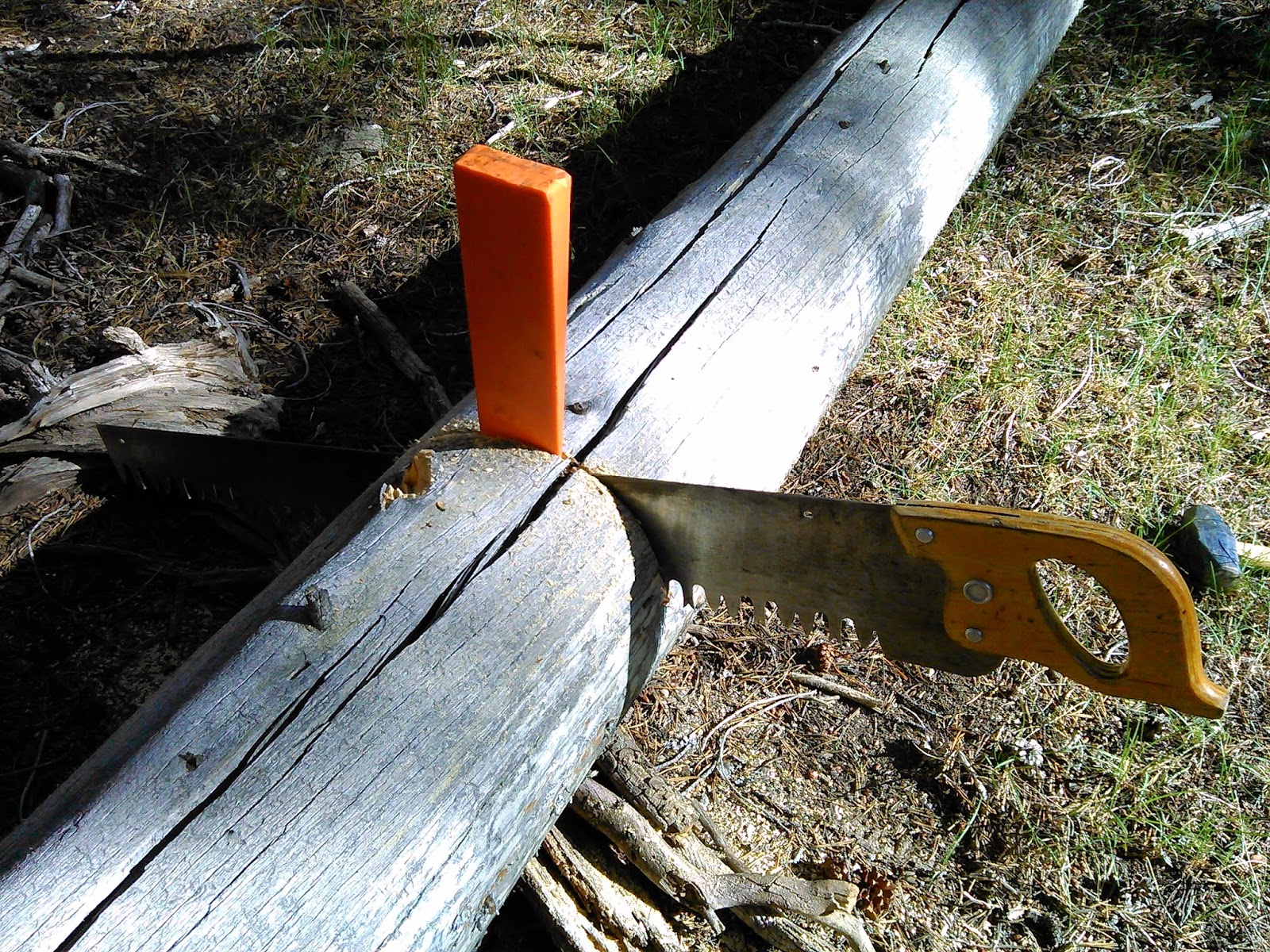 Despite the fact that I knew this log would have top bind and I put a wedge in, my saw still got pinched! How embarrassing! I put in my axe as a hanging wedge and hammered the other wedge a bunch to try and open the kerf more, to no avail. So I got some rocks and sticks to put under the kerf to use as a fulcrum and used a big stick to to push the log up. This opened the kerf at the top and with the other hand I hammered the wedge in more. With the wedge in more I got the saw out! 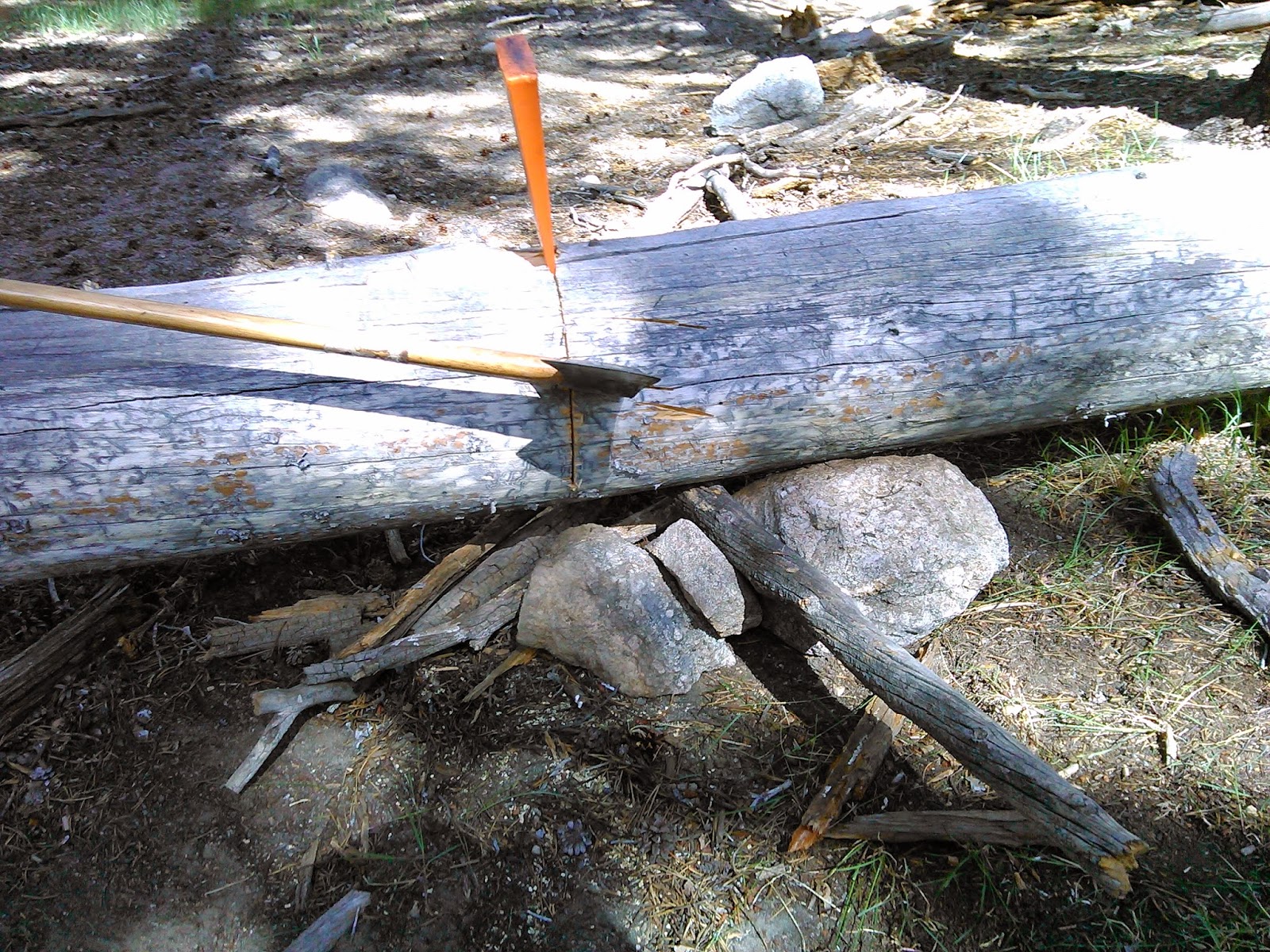 I finished the job by underbucking (sawing from underneath, really exhausting!). To avoid the pinching I should have started underbucking sooner or put in more wedges.
Here is the first cut, complete. The wedge not only opens the kerf but often holds the log together even after the cut is finished. Here the log is still suspended in the air and will not drop until I know the wedge out! 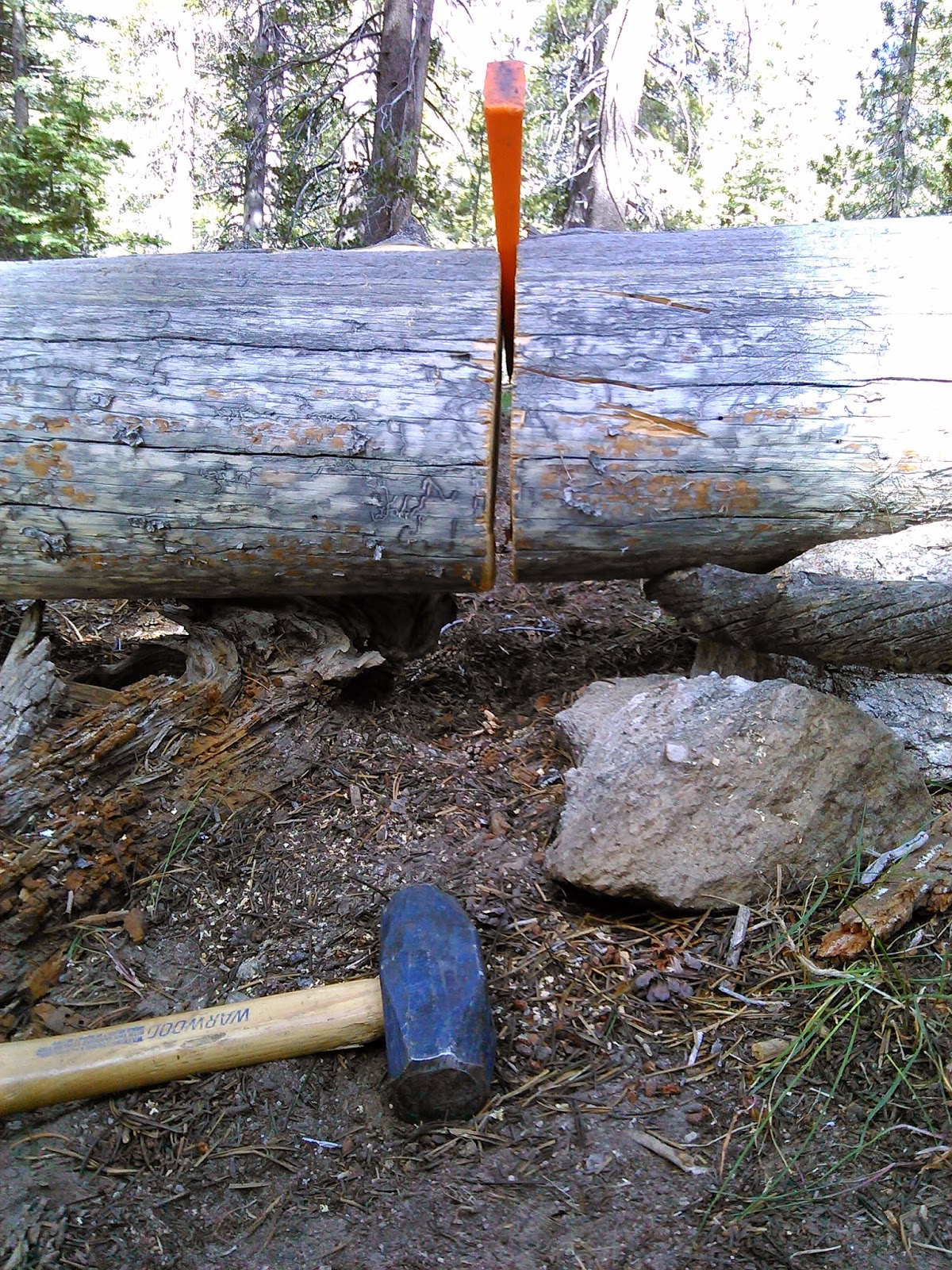 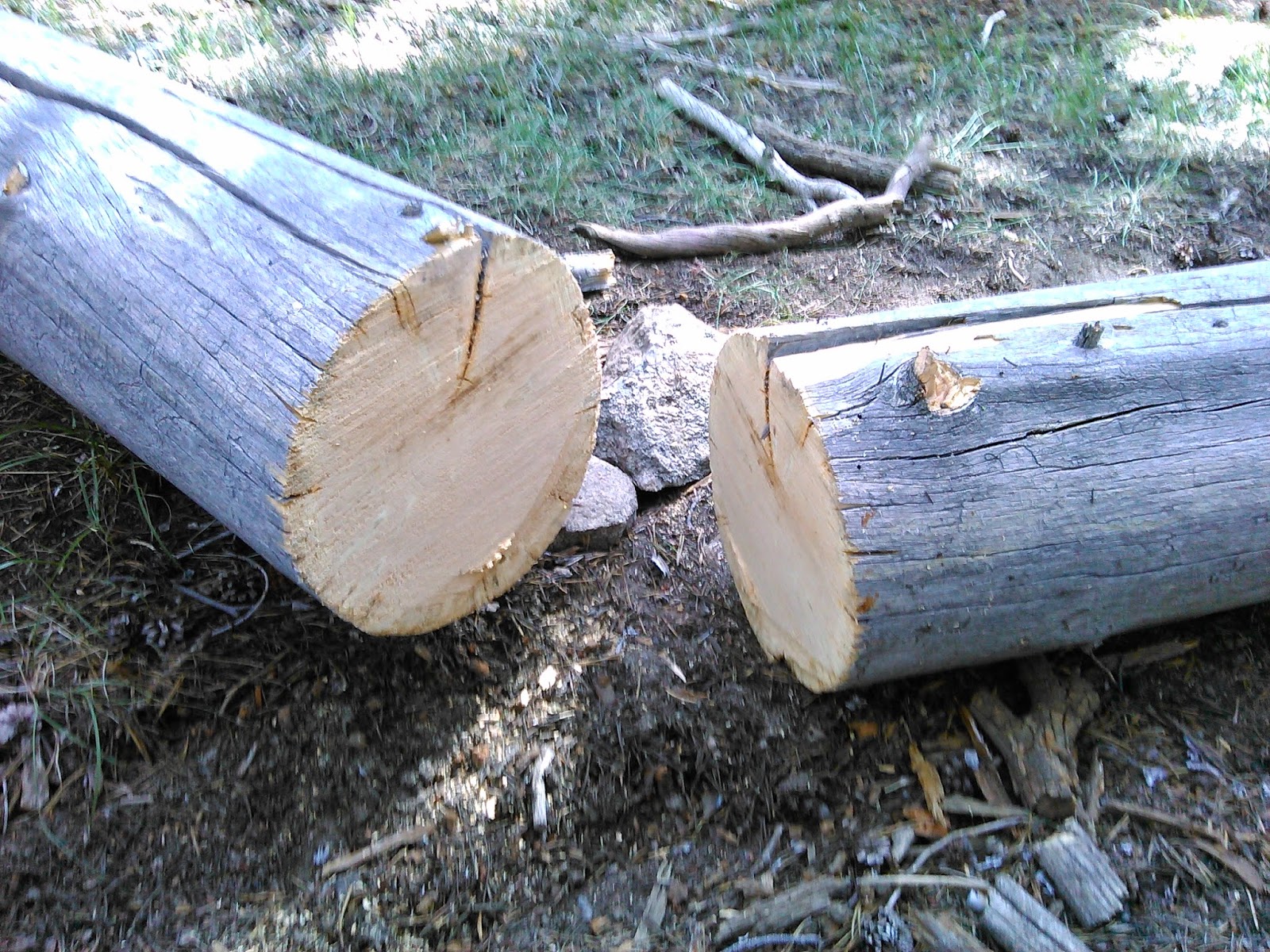 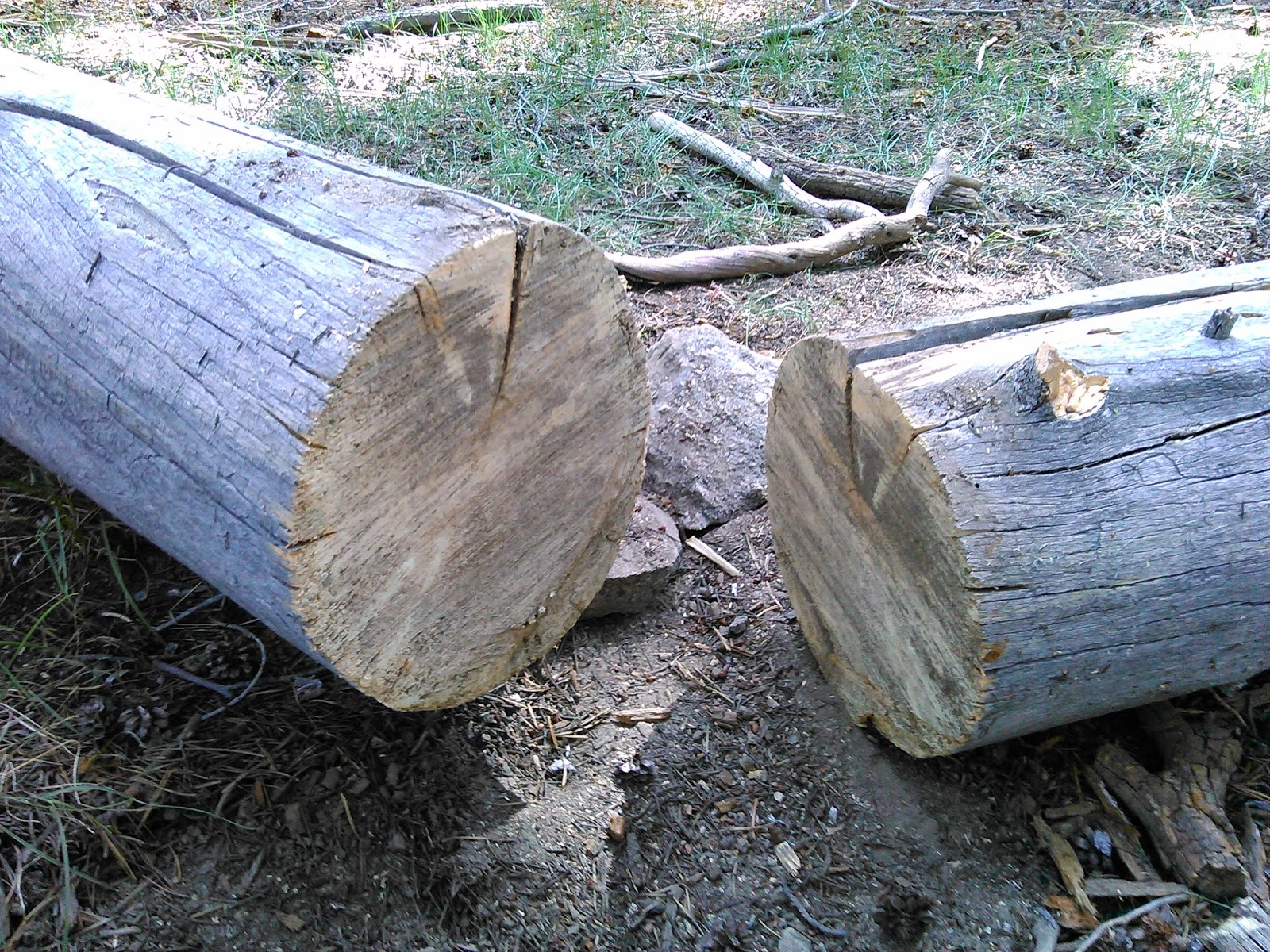 After we make cuts we put some dirt on the cut edges so it's not so blaring and blends in a bit better. The dirt I had was pretty dry but you get the idea. 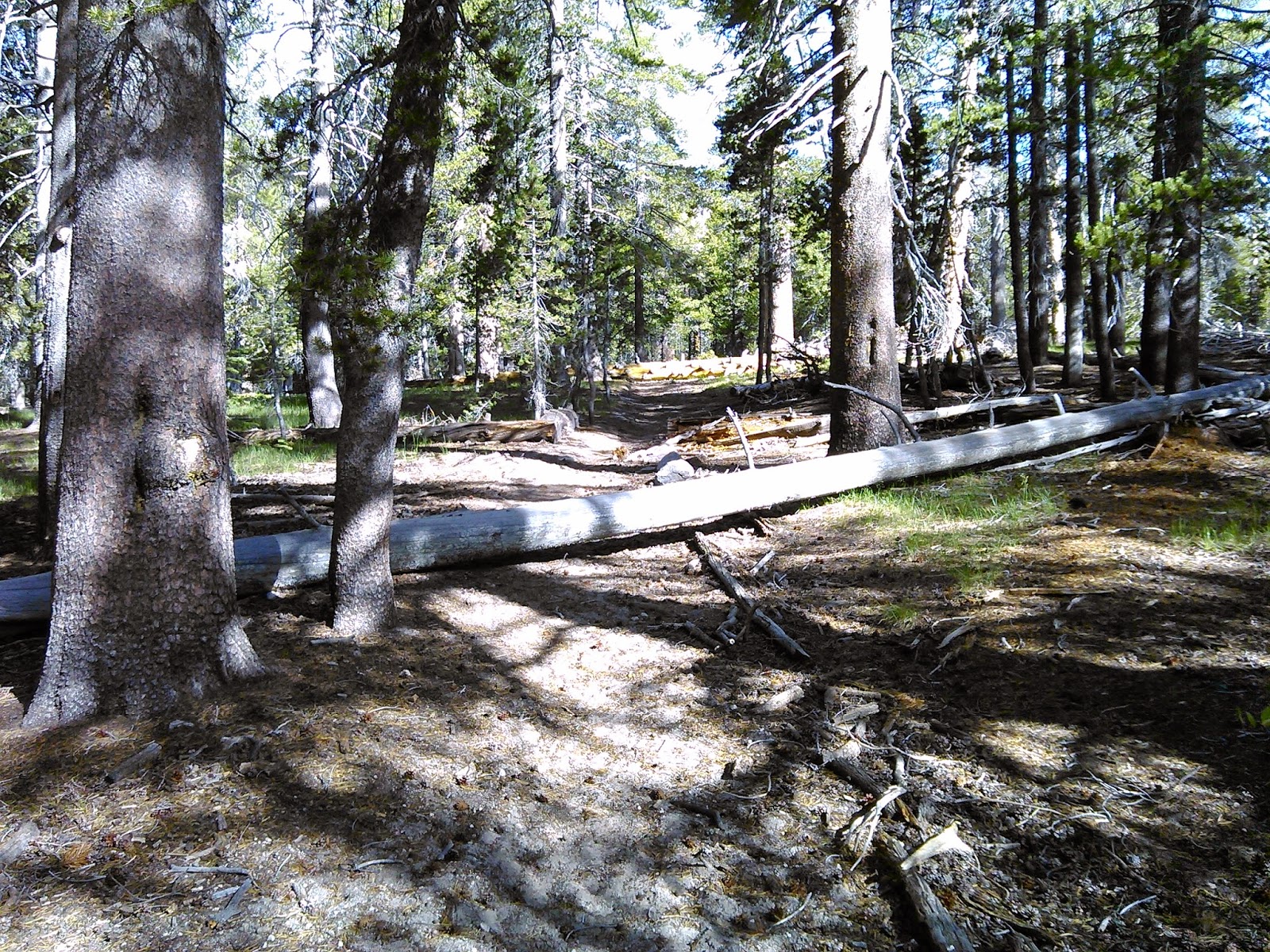 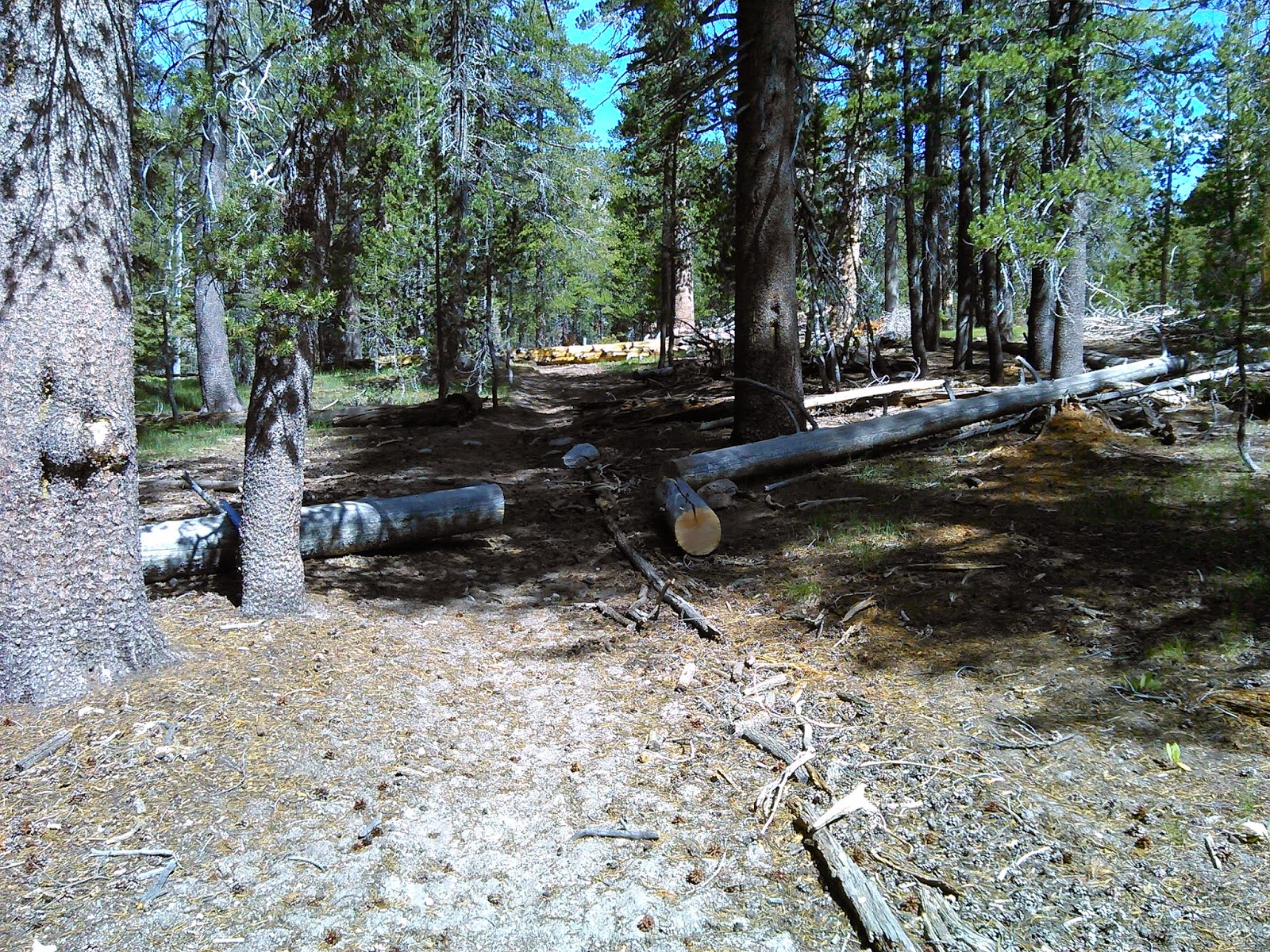 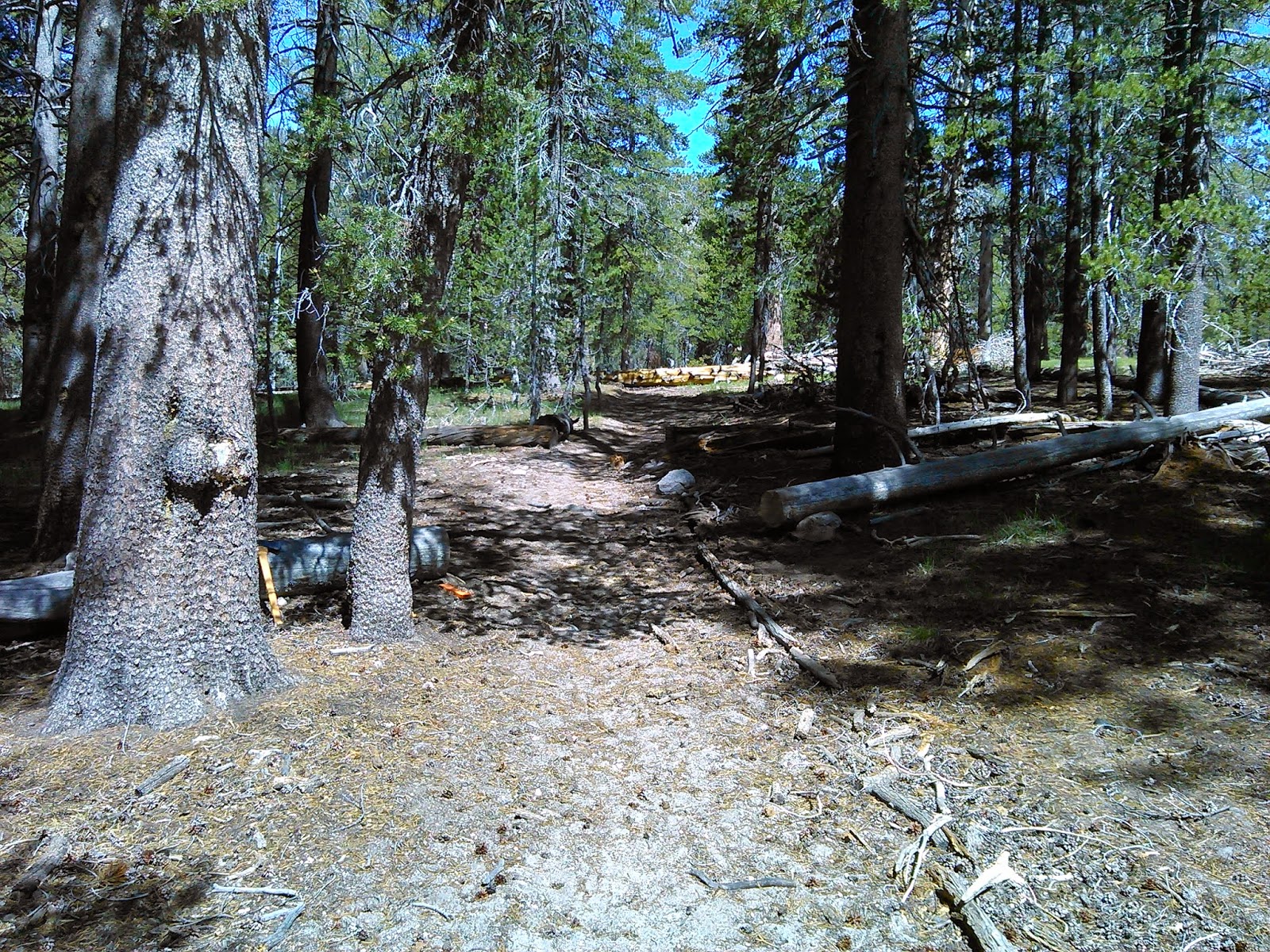 When I was dropped off at the trail head, the Lead Wilderness Ranger who has worked in this district for 20+ years told me about a great spot that had 360 degree views…he wasn't lying.

I was grateful not only for the views but also for the breeze. On Sunday the mosquitoes really blew up. It was at the point that even while hiking I had a swarm of a dozen or so on me and was hiking with a bug net on. The only solution is to get to a windy spot so when I got here and finally got rid of the buggers I was pretty happy!
Posted by V at 11:08 AM