"Writing is like the life of a glacier; one eternal grind."
-John Muir

I feel like I say this every post, but I haven't been so good at updating this. That's what this post's quote is referring to. The end of the 2014 season has come and gone and with it a lot of things in life that required my attention that were not this blog.

Towards the end of the season, one of the gals from the trail crew, Cavi, left early to start school. About a month later another member, Phil, left for another position in Sequioa National Forest as a trail crew leader. That knocked our trail crew down to two people. Since the crew was small and the post-Labor Day slow-down that happens in the Sierras in full effect, our boss said the rangers could go out with the trail crew and help them with their projects. It was a great way to end the season. I am very grateful that my co-workers are so personable and easy to live and work with and it was wonderful to get to spend the last few weeks of the season on trail with them. It was also great to have a change of pace in the work. The trail work I do as a solo-patroling ranger is pretty minor....you've seen it.....mostly brushing and lopping out the trail corridor and cleaning drainage dips in the trail. To go out and do bigger projects with other people who I could learn new things from about trail maintenance was very cool.

We cleared the trails of rocks and other debris like encroaching plants:

We do this to keep people on the trail more which creates less impact on the surrounding environment. When there's bushes and things growing into the trail people tend to walk a bit off the trail which can cause various problems one of them being trail braiding.

I don't have a good "before" photo of this trailbraiding but you can imagine what it looked like when you see the "after" photo....basically a trail right next to a trail. In this case it wasn't from folks feeling pushed away from the trail because of vegetation but was probably because the trail was muddy in the spring or perhaps the trail was hard to see in the early season when there's still snow which created a second trail parallel to the original. We opted to cover up the lower trail to keep people a wee bit further from the riparian area which is generally more sensitive to impact. Also because of the way things erode (gravity), trails over time tend to shift downslope, so if we had decided to keep the lower trail open, eventually it would probably creep closer and closer to the water. This diagram from the Forest Service Trail Construction and Maintenance Notebook illustrates trail creep it pretty well: 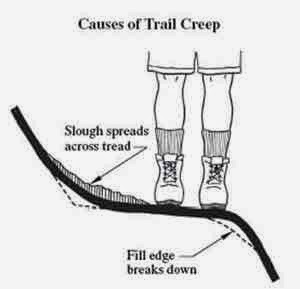 To close the lower trail we dug it up, aerating the soil on the trail we were closing to hopefully encourage plants to grow back in and cover it up. We also put duff and logs in to make it unappealing to hike and as well as having things to hopefully decompose into and enrich the soil again with the hopes to promote the grass and willows to grow in on their own. Here's Kelsey and I working on closing down the trail: 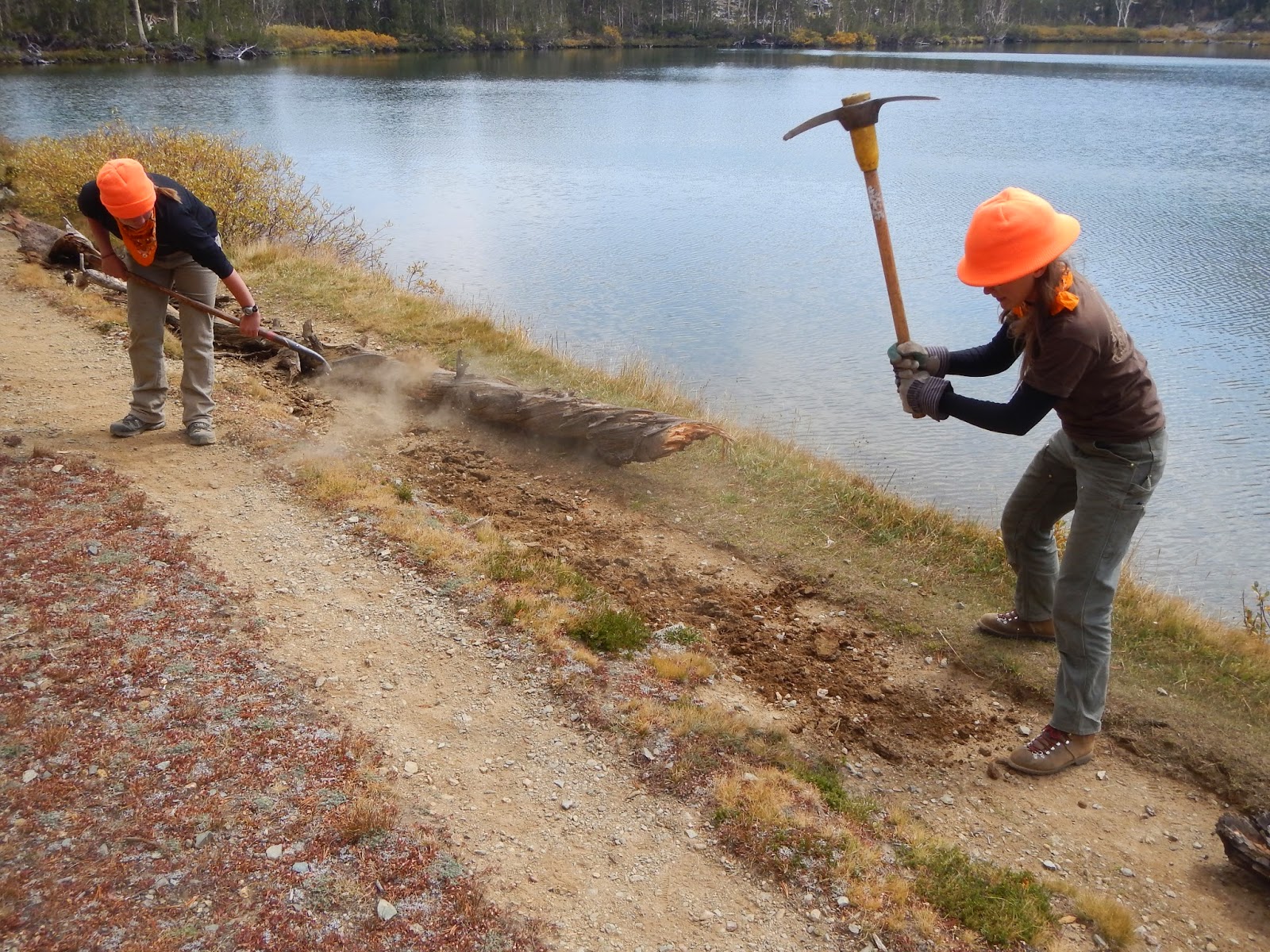 and here's what it looks like after we aerated it and added all the stuff onto the trial we were closing: 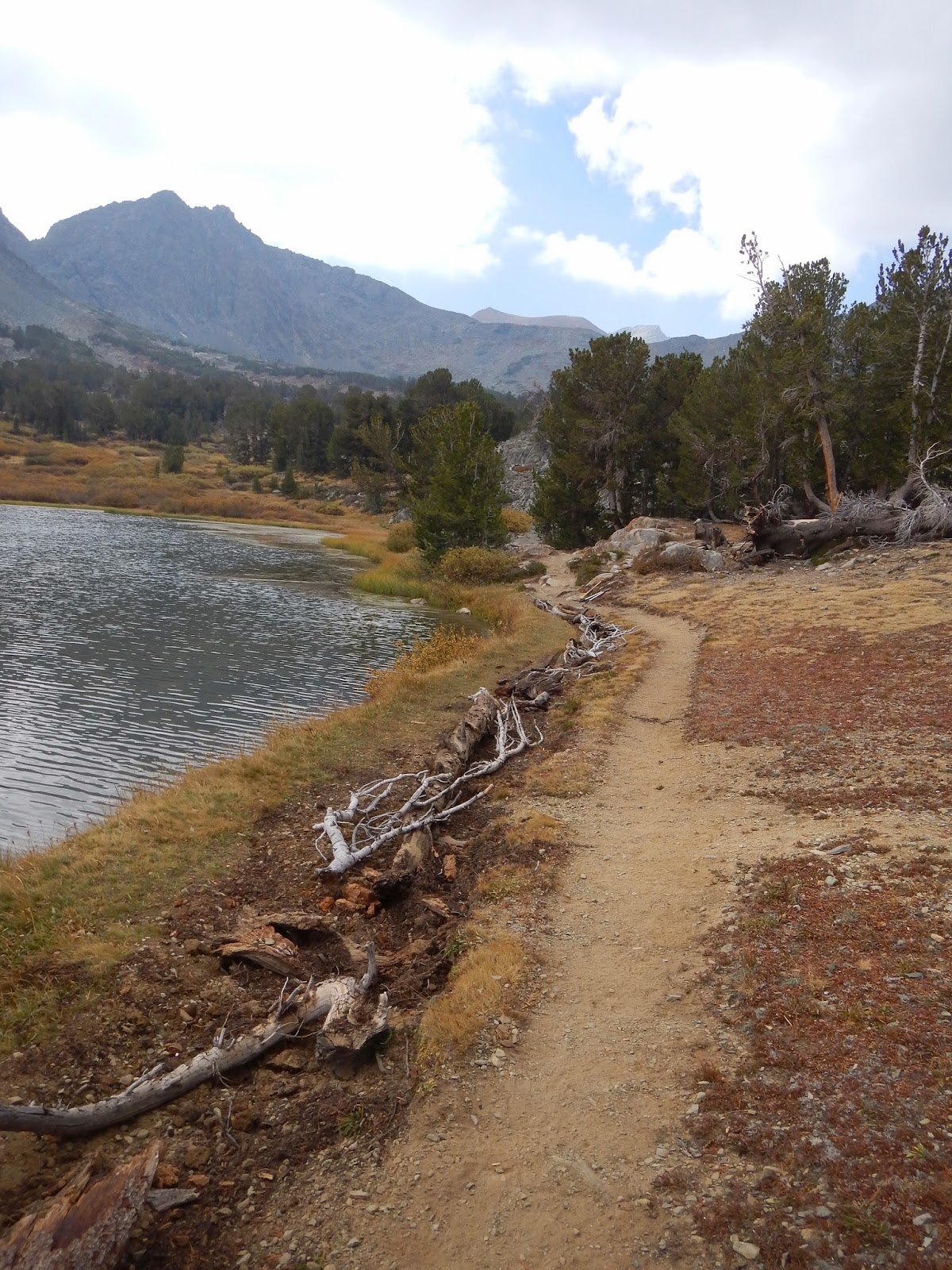 Another issue we worked on in a few different areas was trail trenching. Ever been hiking and the trail turns into a big trench and you're walking a foot below the ground surface? It's the worst right? Hopefully your friendly neighborhood trailcrew is there to help out. In these first 2 photos, not only did we have the trenching to consider but also the fact that the trail was gaining elevation. That means we had to put in some steps to hold in the material we were filling the trench with. Here's Kelsey using the pulaski to dig out a hole for one of the steps. The downward force of folks stepping on these rocks steps makes it important to pin them in to keep them more secure and from blowing out over time. In this photo we have already installed the pinner rocks that will help hold the main step in. You can see the main rock for the step there on the right. 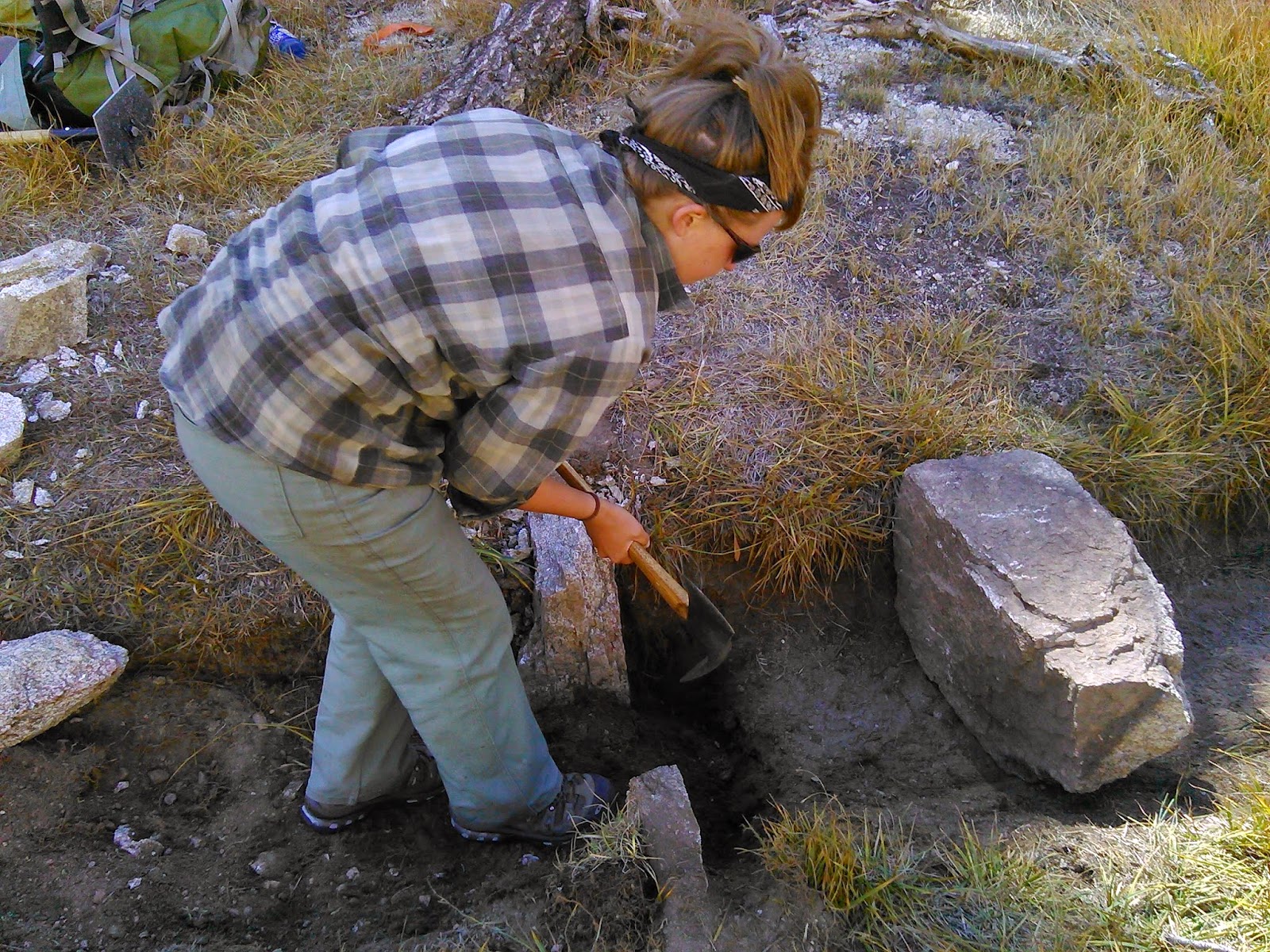 Once the step and pinner rocks are in we fill in all the airspace around these big rocks with smaller rocks and than smash them into smaller smaller rocks. Then, the trench also needs to be filled with rock. Here's Kelsey doing just that with the single-jack....this small rock fill is called rock crush or just "crush." 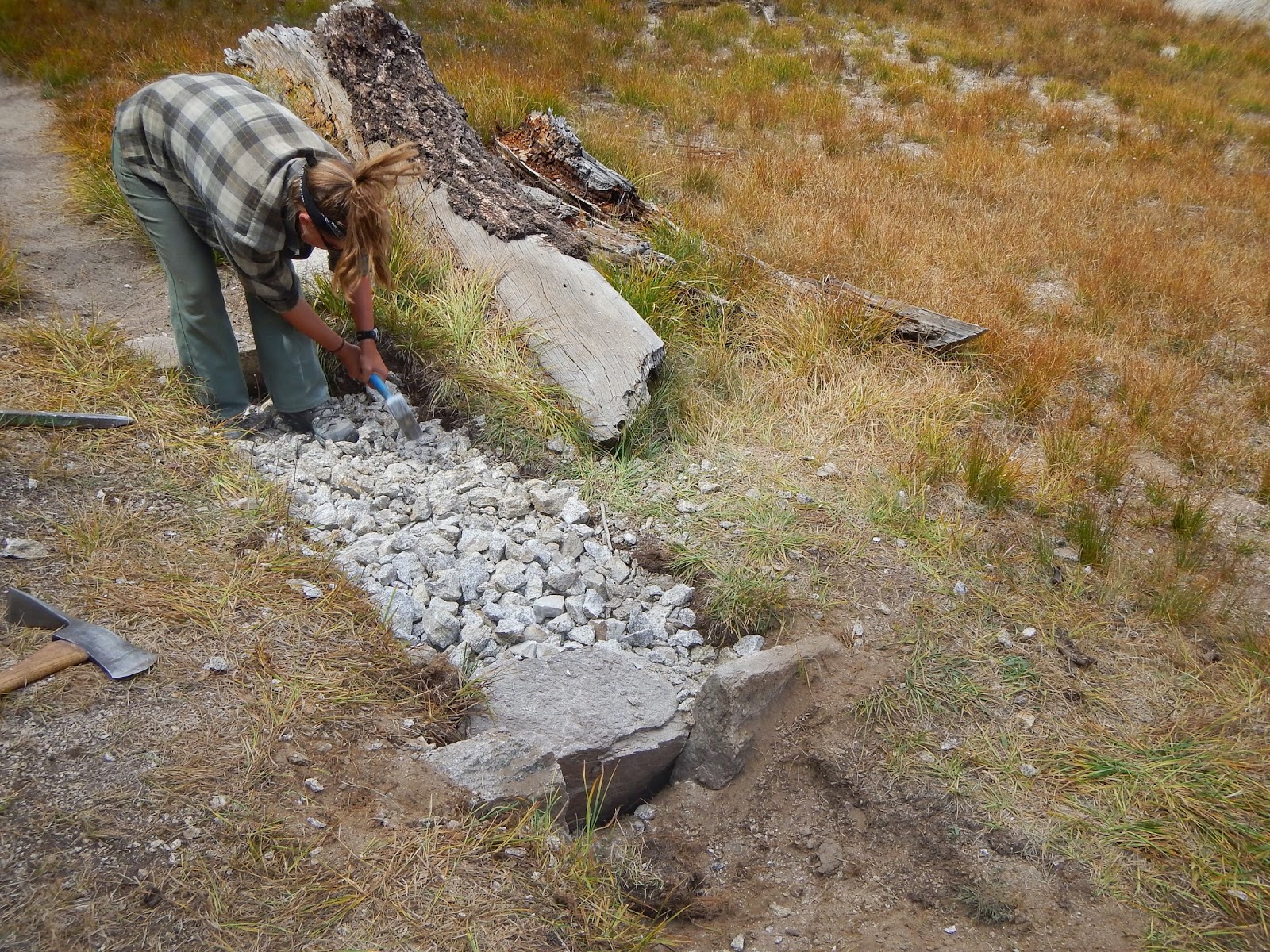 Same concept different area. This area was flat so we didn't need any rock steps to retain the crush. We just filled it in with lots of rocks, smashed them into smaller rocks, and then filled that in with sand and dirt: 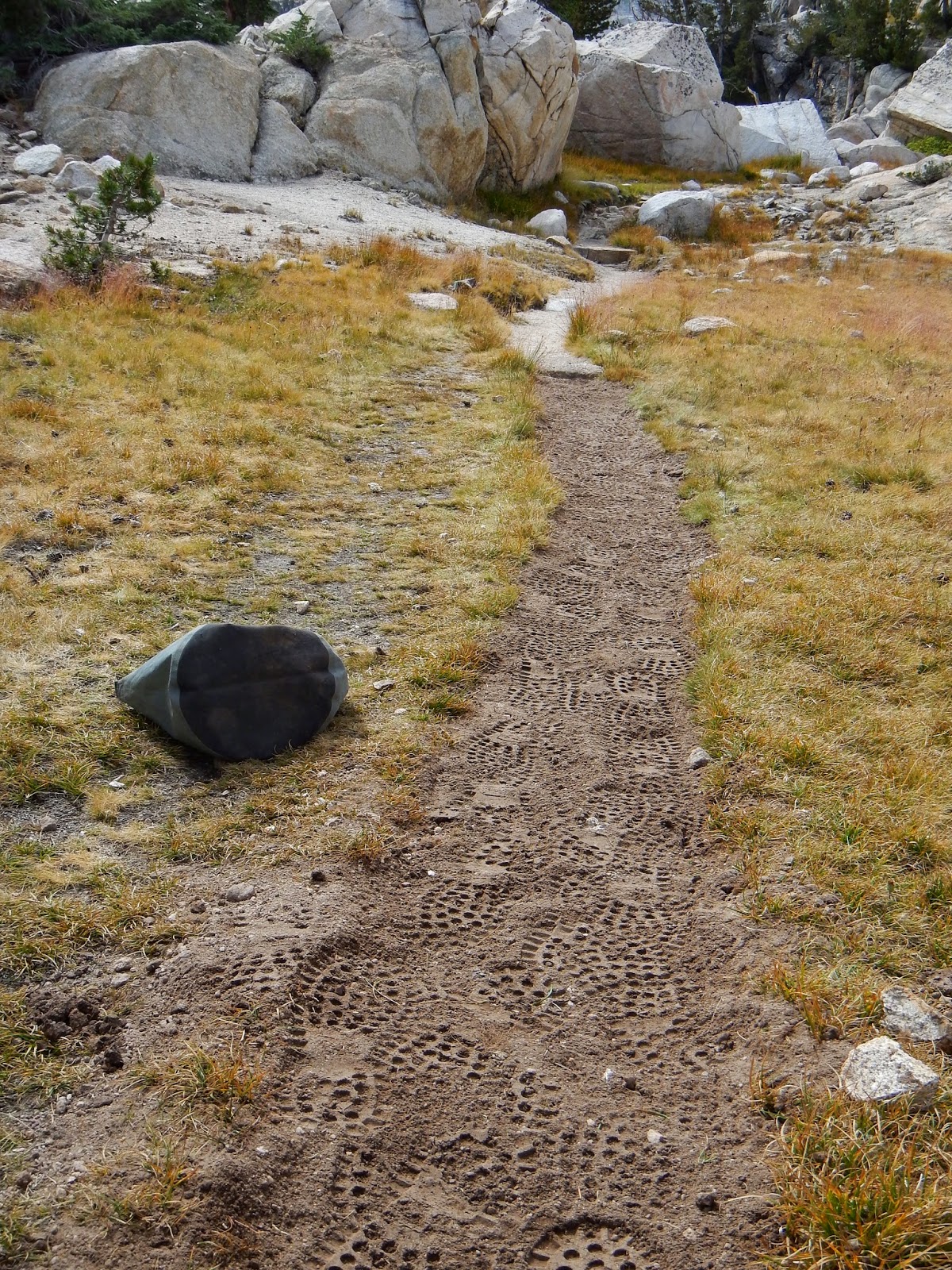 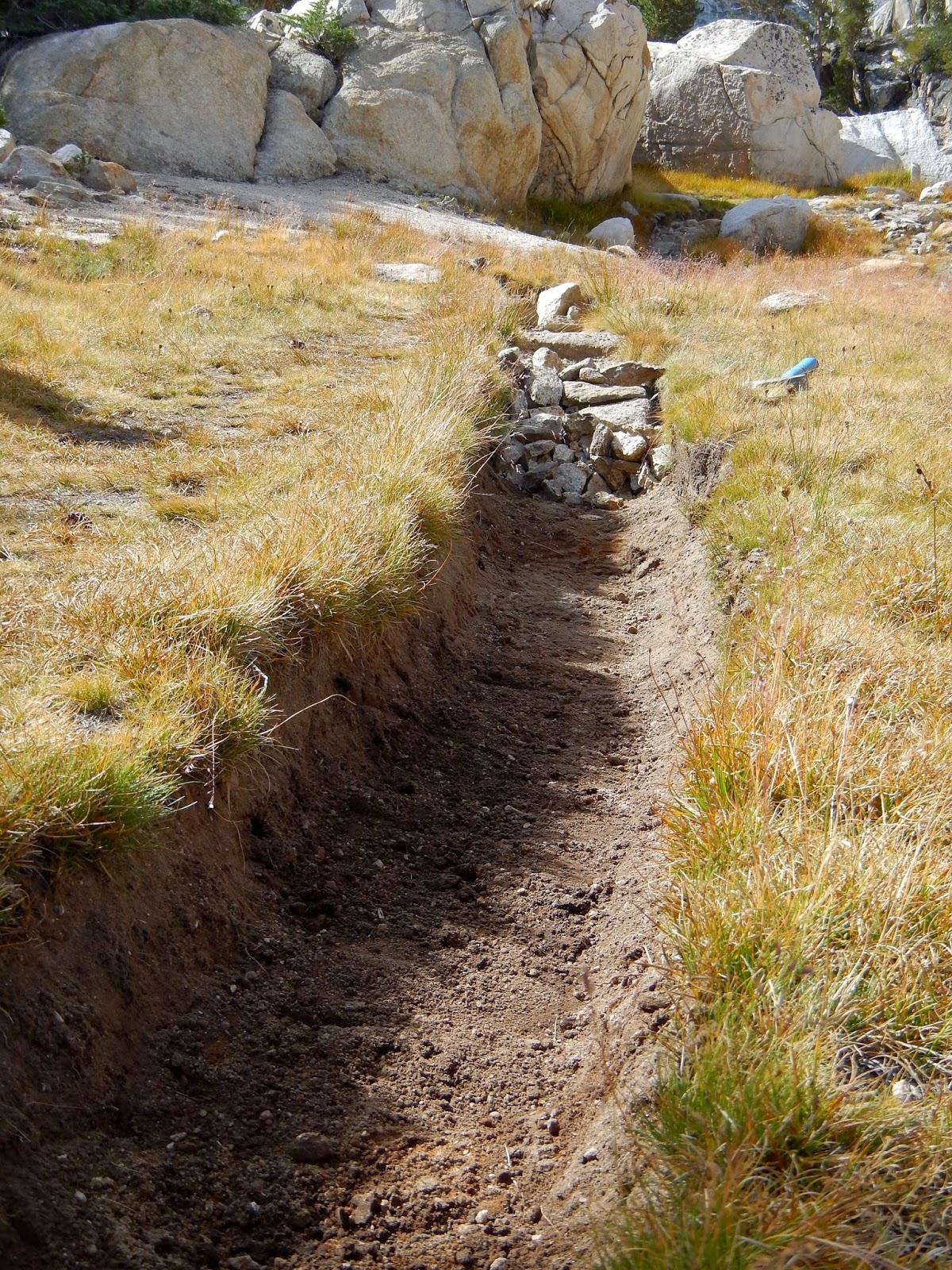 Now what should happen is, the water that runs down the trail and over time creates this sort of trenching will now run under the trail through the rock crush we laid in for it. Here's a diagram from the Forest Service Trail Construction and Maintenance Notebook: 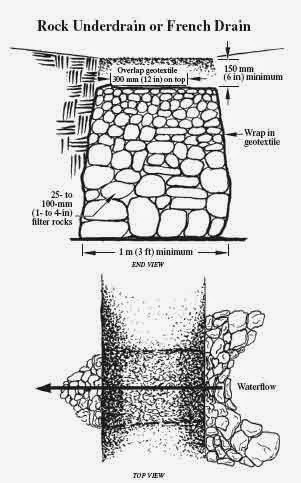 Pretty much all these photos were taken by Matthew Losse, thanks Matt!