I started my season about 3 weeks ago but got the opportunity to travel to another forest to help with a BAER (Burned Area Emergency Response) project. So I spent a week and a half near Kettle Falls, WA working on that.  For Forest Service fires over 500 acres an assessment is supposed to take place to evaluate the need for action. They bring in lots of "ologists" to assess threats to animals, plants, watershed, archeological sites and infrastructure. If deemed by the initial assessment an implementation crew comes in to mitigate threats. The fire areas I was working in had burned late last summer and in the fall they did the initial evaluation and implementation. 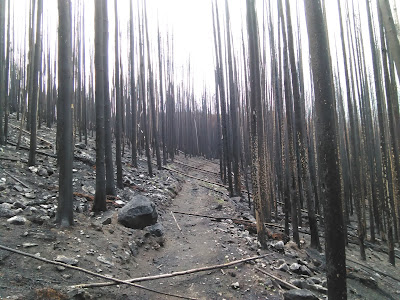 some areas were completely charred and devoid of plants still


The main role of BAER implementation generally ends up being protecting roads. Burned slopes along roads within a certain grade (steep enough to be of concern for landslides, gentle enough that they can hold material without it just sliding off the hill) have straw or wood chips spread across them. This helps prevent erosion, protects any remaining topsoil, absorbs some of the water and with that moisture retention promotes biological activity in the soil. Without the organic top layer of topsoil and plants lots more water travels down hill, that coupled with the fact that the soil is also very loose (no organic material holding it together) makes landslide a huge concern after fires. I arrived to the project after they had done the mulching (dropped via helicopters) so I didn't get to be involved with that.


My role in the project (completely separate from the roads/aerial mulching crew) was to assess how well the implementation of work in the fall on trails in the burned area had held up through the spring snow melt and also do an initial assessment/implementation of a separate fire burned area that had not been worked on. I was monitoring areas that had been designated "high severity burn areas" and were thus most susceptible to have issues. I hiked the trails, checked out how well the drainage features in the trail were working and dug out new drainage features in areas where runoff was apparent (it had been raining recently so it was easy to see where water was moving across the trail). There were a decent amount of miles to cover and the parameters of the project was to create temporary features (lasting around 3 years) so all features installed were drainage dips (I didn't take a photo but here's a diagram that gets the gist across, ignore the measurements, it's for roads) since they are quick to make. It's basically a dip in the trail with a berm that runs across the trail at about 45 degrees (the angle helps slow the water gently as opposed to having a 90 degree berm perpendicular which would stop the water too abruptly) directing the water off trail. If there were other drainage features (log and rock water bars, puncheons or turnpikes with ditch and culverts) that needed cleaning we cleaned the sediment out of them. There were also some areas with a backslope on the trail that was too steep which was knocked down. Vegetation has a hard time growing on slopes steeper than 45 degrees and optimizing the potential for vegetation to grow back to help hold in the soil and absorb water is important. There were also areas where we removed sloughing and berm from the trail to encourage water to run across the trail instead of getting stuck in it and running down trail. The idea behind working on these trails and making sure they were very well drained was to hopefully keep landslides from blowing the trail out and washing sediment into the watersheds below. The local ranger district there had a soil crew to help me with the work and there were also other folks like me brought in from other Forests to help. The size of my crew changed every day, sometimes just one other person and sometimes 6 others. Some people had trail maintenance experience and some had none so it was neat to get to explain the anatomy of the drainage features and why and how they work. Also since I got to work with the local soils crew I could point out general trail issues that would only be exacerbated by increased water runoff in the post-burn environment and they can hep act as a liaison in explaining those issues to incoming conservation trail crews that would be coming later in the summer to do more trail work.


Bonus to working in a burned area...TONS of morels!

Saw lots of shattered rocks like this, I think they got so hot in the fire it caused this 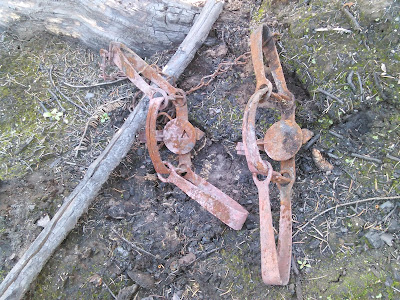 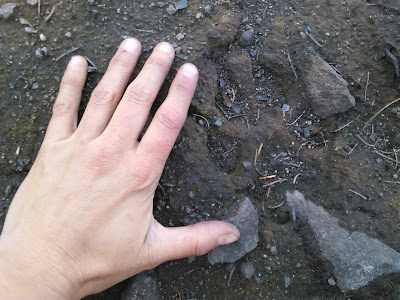 It was neat to work in a different area and see all the morels and wolf tracks...things I hadn't seen before. We have a wolf pack in my district but the female was poached a little over a year ago. The biologist told me it's unlikely the pack will survive without her. I also got to learn more about using Avenza and ArcMap which though aggravating at times, was great for me because I just love maps. I was working about 10 days straight for 10-14 hours a day so I was ready to come home in the end.
Posted by V at 8:42 AM